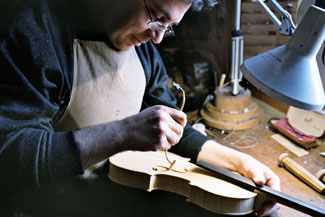 Took up woodwork as a child working with his father, Olindo Virgoletti, a skilful carpenter and an inventive lute-maker who made about 30 instruments: guitars, violins, violas and a cello.

After his father’s teachings – when he was 24 – he met the great Master Ferdinando Garimberti, who used to spend his holidays in the neighbouring village of Villaberza.

He was his first real teacher and, following his precious advice and his encouragement, Virgoletti built his first instruments. After his death, V. Decided to go on in his studies.

For nearly 10 years, he was an apprentice of Sesto Rocchi’s – a famous and highly considered lute-maker working in the nearby village of S.Polo (R.E.).

Since 1993 he has been in contact -with mutual regard – with Francesco Bissolotti and his son Vincenzo.

His instruments are known and appreciated all over Italy as well as in France, Spain, Germany, Great Britain, Canada, USA, Japan and Australia.